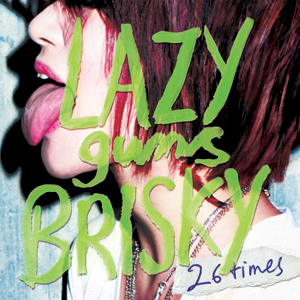 LAZYgunsBRISKY’s 26 times is a focused and lean album that shows the up-and-coming punk rock band in solid fighting shape. Working with producer Kenichi Asai (ex. BLANKEY JET CITY), there’s a confident and mature female energy in their latest release (released in America from Good Charamel Records) that makes you hungry to see this band live.

26 times opens strong with a full-force trio of “Liar,” “Navy Star,” and “Bitter Day.” The past few years of live-house performances (since 2008’s “Catching” and “Quixotic”) have taught LAZYgunsBRISKY how to grab and audience and keep them, starting with spit-in-your-eye vocals on “Liar”:

Lucy and izumi’s vocal-and-guitar combination assault seem to dominate “Navy Star” upon first listen, but it’s the bass line you’ll be humming when you play this song back in your head (no small feat considering Lucy’s soaring-megaton-missle work throughout).

Pockets of solid back-line grooves are spread throughout the album, with “Now!” and “Sneaky” giving a well-earned spotlight to bassist azu and drummer Moe. In contrast to the scores of Japanese girl-punk bands that just add “crazy” to compensate for musicianship, LAZYgunsBRISKY isn’t afraid to let the music do the talking for them, with extended instrumentals on “Now!” “Sneaky” and the fun and unpredictable “Ring, ring, ring,” in which Lucy gives a farewell MC from the stage, thanking us for coming to “the show.”

If you treat the first 7 tracks of 26 times like a live show set, the album’s final track “Abbey Road” comes in like a lullaby encore, softly assuring you the last 40 minutes were for keeps. It’s a perfect kiss goodnight from a band that’s promising to rock your world even more next time.