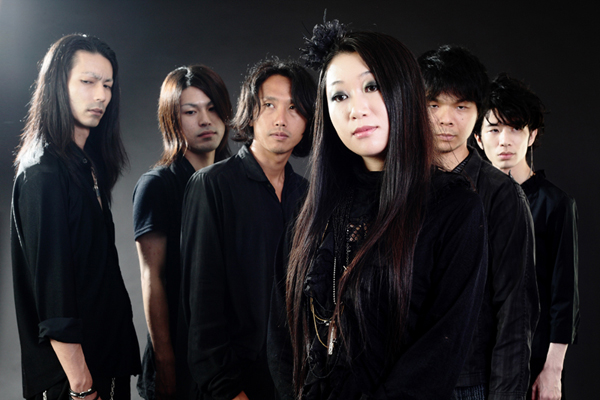 TAIA’s logo says quite clearly that you’re from Okinawa, so obviously you’re proud of that association. How does Okinawa affect your music?

YASHA (bass): Since we’re comfortable in this place, it’s a great environment for us. We can be our natural selves while we work on our music.

SEIKA (vocals): TAKA and I weren’t born in Okinawa, but we’re strongly influenced by Okinawa’s rich nature and calm climate.

FUGA (keyboard): Our music, even down to the instruments and editing we use, are mainly based on Western music. But I think Okinawa influences us unconsciously during the creative stage, like composing or imagining the lyrics. I can’t say whether it’s the local folks or the history or customs, but I’m happy if you feel something from Okinawa in our music.

TAIA’s music contains some very precise composition. Who is the main composer for the group? How much of the final song is written before rehearsals, and what usually changes when the whole band gets involved?

FUGA: The main composer is the guitarist, TAKA. There are times when the guitarist (URA) and I will compose, too. It depends on the composer how much of the final song is written before rehearsals.

TAKA (left-side guitar): Right. When I’m composing, I just have the guitar riffs and I make a report like “I made a song like this,” at the first rehearsal. Then each member adds things they want. I bring the idea, and the band completes the song.

FUGA: If TAKA is composing, almost all of guitar riffs are complete, but for other parts, we each add arrangements in the studio as we listen to TAKA’s directions. Sometimes, the early structure of a song can change a lot if we feel it going in a different direction. For me, when I’m composing, it’s a bit different. I add all the arrangements and complete most of the song before we go into a rehearsal. We’ll work on the details for all the members in the studio, but the main structure of the song doesn’t change that often.

What about URA? Is his style more like TAKA or FUGA?

FUGA: If URA is composing, right in-between TAKA and me. He creates the guitar parts, main phrases, and general rhythm before the rehearsal, and we add more in the studio. The general structure is already made, but it can be changed if a better idea comes up.

TAKA: The unique thing is that we don’t decide on a certain image or style. Each player adds their own feeling to each song.

FUGA: Sometimes, even if the structure isn’t changed, a song can develop a different mood or personality just based on each member’s performance. I enjoy those changes when I’m working as a composer.

TAKA: You might think this sounds disorganized, but it comes out nicely for some reason. What happens when the whole band participates? It becomes like TAIA.

URA: I like the sense that things are changing. New sounds are born and the song becomes more magnificent during the process where all of us play together. That’s what’s interesting.

Many of TAIA’s songs change tempo at almost exactly the halfway point. Why is this type of change so consistent?

TAKA: The phrases that come into my mind just naturally change tempo, I guess.

FUGA: It’s not like we absolutely try to change tempo when we compose. We want to include many scenes and emotions within one song, and we try to keep it all connected so it’s not unpleasant for the listeners. What do you all think?

The TAIA website says TAKA and URA are “right- and left-side” guitars. What would happen to your music if you switched sides?

TAKA: This is a must. I can’t play if I’m not on the left side. I’m not comfortable if I’m not next to the bass. The bassist, YASHA, has been playing next to me since I started playing the guitar. The left side is easy for me.

URA: I’ve only played on the right side on the stage since I started playing the guitar. I don’t think about playing on the left side. It’d be interesting to switch once, to see how the stage would be different.

YASHA: It’s irreplaceable. Like all the other members, it wouldn’t be TAIA if we didn’t have FUGA’s keyboard.

TAKA: We wouldn’t be complete if there was no keyboard.

FUGA, how do you feel about all this praise?

FUGA: It’s the same for most of the bands with keyboards. By itself, it’s just a keyboard — a single instrument. But within the band, it can bring in sounds from all kinds of instruments. The keyboard can take the lead, or it can create sounds that only musicians can pick up. Even for that kind of sound, there would be emptiness if it’s not there.

URA: Without the keyboard, our songs would feel smaller, the imagery would be smaller. We’re trying to create something grand, something that surrounds you, so all that doesn’t happen without FUGA.

Many of your music videos feature dramatic storytelling. How does this imagery connect to your music?

YASHA: We want you to feel TAIA’s music with all your senses, not just the information from your ears. In our music videos, we try to connect the sounds and images to make a powerful feeling.

FUGA: Mainly it’s linked to the world of the lyrics, but I’d say it’s mixed — some scenes reflect the lyrics and some scenes reflect the music. Most of the songs that were made into PVs are written in Japanese, so it might be difficult for non-Japanese speakers to understand the meanings. I think everyone can enjoy TAIA’s music from the images too.

SEIKA: As FUGA says, mainly the images reflect the lyrics. But we don’t want to make it too literal. We want you to expand the images in your mind to create your own meaning for the song.

KEN: I like it because people can see what kind of band TAIA is right away — in just a few seconds you can know our personality.

What do you like about creating the music videos?

SEIKA: I really enjoy it. It’s like making a movie with my friends. The shooting process is very special to me, because I can’t really look at the members’ faces during live shows. But on our set, I can really take my time to watch everyone.

FUGA: I like the editing process after shooting, because it feels like looking at the creation of my favorite artist. During the shoot, I enjoy the little bit of free time at the location. We’re usually shooting in places I don’t normally visit, and they have a special atmosphere. I get inspiration from just walking around.

Which TAIA music videos are your favorites?

URA: My favorites are “Prayer” and “Praise.”

KEN: “Another Aspect” and “Kazamai.”

YASHA: I like “Another Aspect” because I think it comes closest to the image I had in my head for that song.

SEIKA: Honestly… all of the PVs so far are my favorite! (laughs)