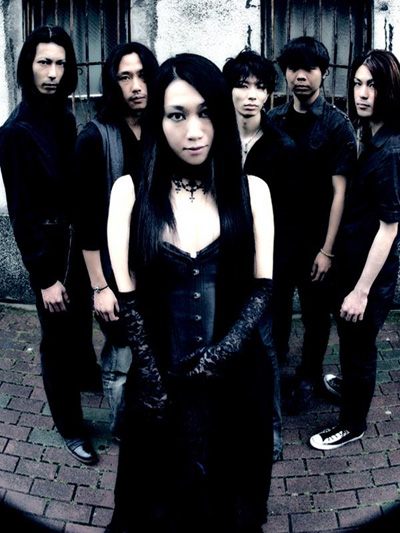 Seika, what stories inspire your imagination?

SEIKA: Since my childhood, I’ve always loved novels, movies, and manga. They’ve had a big influenced on the ways I think and feel. I don’t think I could write lyrics if I didn’t have the emotions and images I’ve experienced from those creations. But it’s not like “I got ideas for this song from that movie,” or “This is from that novel.” For any set of lyrics, there’s a mixture of those influences and my own imagination.

Is there a particular genre that you’re drawn to more than others?

SEIKA: Science fiction works like “Hi no Tori” by Osamu Tezuka (Astro Boy, Black Jack). I love novels by Heinlein, Niven, and Card. I’m also influenced by classic Japanese literature, and I think “Kazamai” shows that a lot. Natural scenery and historical heritage are absolutely necessary for my inspiration. To travel and visit new places is really a great stimulation. The inspiration for lyrics might come from the scenery of a mountain I climbed when I was small, fire-like color of autumn leaves, sight of snow that spreads as far as I could see, etc.

If words are so important to your expression, how do you stay connected with a live audience during the long instrumental sections?

SEIKA: I usually move my body to the music, and I do my best to energize the audience. I don’t take my eyes off them. But during the instrumental parts, the audience is watching the other members perform instead of me, so it’s really a challenge for me to stay connected. (*laughs)

Two songs from ASYMMETRY (2005) have been re-recorded for FUUENYASOU -TAIA WORKS- (2010). Why did you choose those two songs? What was your goal for the new versions?

YASHA: Because these songs are still popular in live shows. For the new recordings, we tried to show the power these songs have gained from the live shows.

FUGA: The members had changed since we recorded ASYMMETRY, so we decided to record a current-member version of “Sakura” and “Akatsuki” that we perform often at live shows. We also thought that aggressive songs were better to show the styles of the current members (especially the drummer KEN). We expect our fans to feel something different from these new versions, especially from KEN’s style.

You released all-Japanese and all-English versions of your album THROUGH YOUR TEARS. Were the songs written first in Japanese or English?

SEIKA: We — speaking for TAIA — think that it’s very important to have the sound and nuance of Japanese, our own language, within our songs. This is because Japanese is the language we use to think, and naturally it’s the language in which we’re able to write lyrics and sing with the most specific meaning and creativity. We take it seriously that the audience understands the lyrics. Of course, there are many ways to interpret and understand lyrics, but you can’t find your interpretation if you have no idea what the lyrics mean. So re-recording in English was a natural decision for us. We wanted more people to listen to and enjoy TAIA’s music.

Are you guys comfortable with English? In the band, whose English is the best? Whose is the worst?

TAKA: SEIKA is the best! KEN is the worst!

YASHA: SEIKA is the best, and I’m the worst.

URA: No, I’m the worst. But yeah, the best ones are SEIKA and FUGA.

FUGA: Our vocalist, SEIKA, is the best. For the other members, I can’t really judge because I haven’t really seen them use English. I’m okay as long as it’s not a complicated topic.

SEIKA: FUGA is the best. I’m not so good. The other members are just misjudging me. The worst is… well, like FUGA says, I don’t know because I haven’t seen other members use English. (smiles) I’ll find out.

TAIA seems like a very serious band on stage. After a live show, what helps you relax and release your tension?

TAKA: When a live show is over, the tension is relieved and I’m relaxed.

KEN: After a live show, we drink all night at an after-party or I listen to the bands I like. That’s how I release my tension.

SEIKA: The tension never stays after a live show. I think that the tension goes away at the moment I start singing.

URA: First, I change from the stage costume to my regular clothes. That’s when I can start to calm down.

FUGA: I listen to music, watch a DVD, read a book, play the piano, play a video game. I often relax alone. But sometimes it’s not just relaxing, sometimes I get new ideas this way, too.

Fans in America can’t see your live shows in Japan, so they’l listen to your music on their iPods and PCs. What moment of the day is best to experience TAIA’s music for the first time? — at work, at school, on the train, in their room? Please give new fans some advice.

SEIKA: It depends on the song, but if it’s the first time, I’ll be glad if they listen to our music when they’re having some relaxed time alone. If they like it, I hope they share with friends what they liked and what moved them. It’s exciting for me to imagine that.

URA: I think it’s good to listen when they’re relaxed in their own space. Early mornings and evenings are good too. I hope they can find the best time for them and enjoy TAIA’s music.

TAKA: I want them to listen to what they want, when they want. Anywhere is okay!

KEN: It’s best to watch our PVs on your PC or listen to our CD in your room!!

YASHA: It depends on the song. I hope they’ll listen really closely to the music with headphones somewhere private.

FUGA: Anytime is good. There’s no need to get ready, like “I’m gonna listen now” to TAIA’s music. It’s okay to listen while you drive, study, or work. Your body will react if there’s a cool section or a phrase you like, and that’s the type of music we create. If you like it, please listen to it again. There can always be a new discovery.