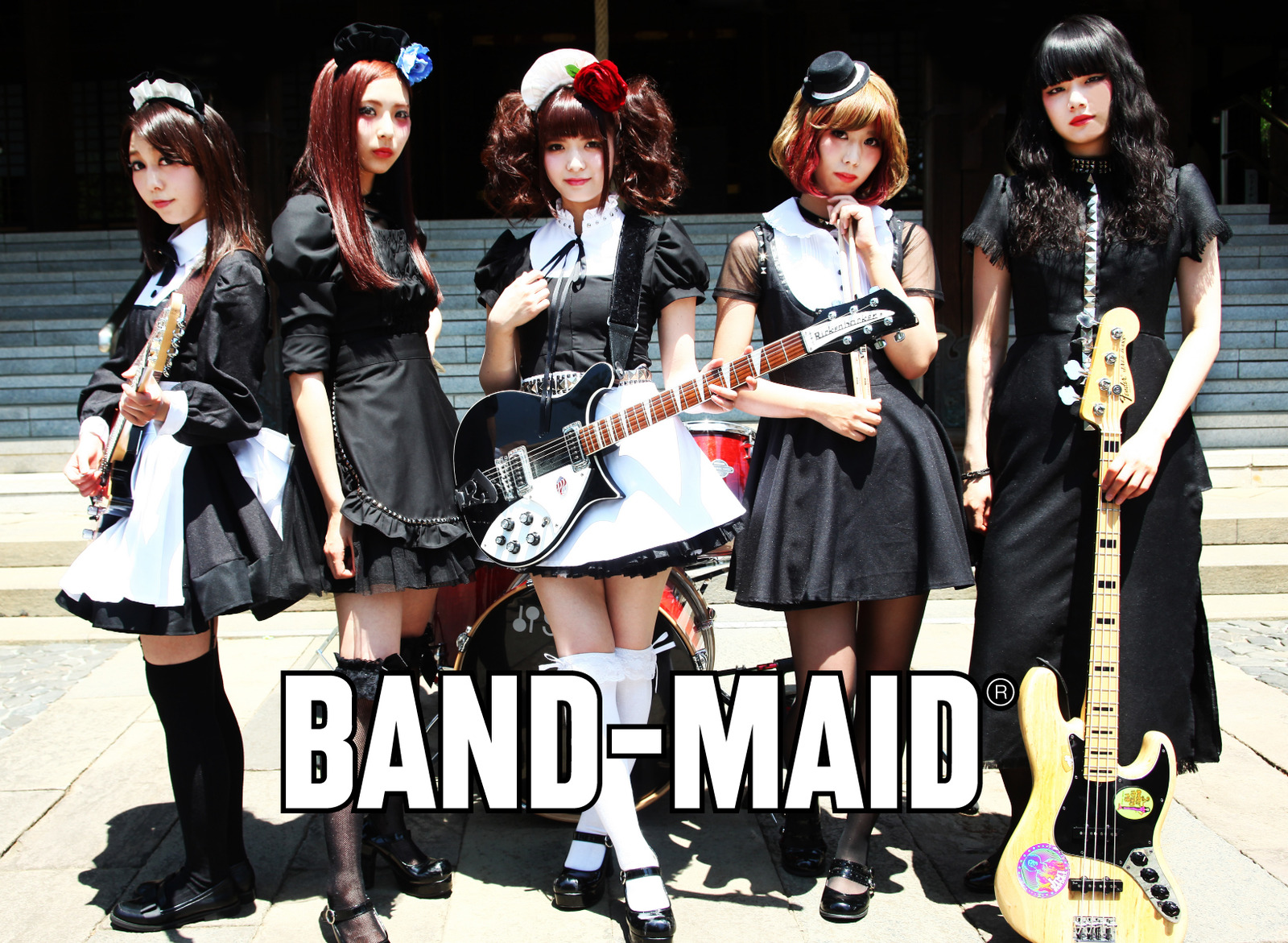 Since the launch of their music video “THRILL” late last year (550k+ views and counting), BAND-MAID has been turning heads with their heavy sound and the inevitable reaction, “Are these cute girls really playing?” Yes, they’re playing, and playing for keeps at that, adding a series of demo and rehearsal videos to their YouTube channel to put all doubts to rest. No air guitar here, just girls who are ready to put a smile on your face (even their video description for “Real Existence” teases “Welcome, master…”) with a serving of solid rock.

What’s the meaning of the name “BAND MAID”?

Miku: I used to work at a maid cafe, and I thought “I want a band!” So it became BAND-MAID — maids in a band!

How did BAND-MAID come together? Did any of you know each other before joining the band?

Kanami: Miku was looking for members to be in BAND-MAID. I was approached to join the band, and then I brought my friend, the drummer Akane, with me. Then, Akane brought her friend, the bassist Misa. So the instrumental performers were all gathered through connections between musicians. After that, our vocalist Saiki joined through an audition.

What do you like best about your maid costumes?

Kanami: Not all BAND-MAID members wear really frilly maid costumes. We each have our own style, so our maid costumes match each member’s personality. I like how it looks cute and gives a lady-like impression.

Misa: I like how the costumes are a contrast — in a good way — from our hard rock, heavy songs and the personality we get to show in our live performances.

What would you say to someone who told you girls can’t play metal music?

How long have each of you been playing music?

Miku: Since I was small, I loved singing and I was a child who would sing anywhere. I was going to a vocal school about 3 years ago. I started to play the guitar after starting BAND-MAID, so it’s been about 2 years.

Saiki: I started singing when I was 14, but just as a soloist. This is my first time in a band.

Kanami: I’ve played classic piano for 15 years, and I’ve been playing the guitar for 8 years, also as a singer and songwriter.

Akane: 4 years for piano, 5 years on the trombone, 6 years for the drums.

The MV for “Real Existence” is on the steps of a temple – how does that connect to the meaning of the song?

Miku: Uniting these two images of Japanese culture, I suppose. It’s a chaotic mix, I think, the maid costume and the temple.

Saiki: I think that it shows the contrast, which is our band’s concept, rather than a connection to the song. Plus it’s a setting that fits Japan.

When you’re rehearsing a new song in the studio, what’s the dynamic? How do you all work together?

Miku: The mood maker is Akane. BAND-MAID loves to have fun, and we tend to start goofing around. Kanami is the most serious one, and she usually brings us back to the main point and leads the practice.

Saiki: Right. Kanami is a serious person, so she leads us through. Akane watches out for us, too.

Kanami: The leader Akane advises us on performance skills, and the bassist Misa watches the monitors a lot. I’m usually focusing on the whole picture. I think we all contribute something essential.

Misa: Akane is both a mood maker and our leader. We all try to be as serious as we can during rehearsal.

Akane: Usually Kanami is the moderator, and I organize our rehearsals and the performances, too. They put a lot of trust in me!

Saiki, it sounds like your voice has grown stronger since “Thrill”. How often do you practice? Is there a metal vocalist you look up to?

Saiki: Thank you. I don’t focus on any other vocalist in particular, but I do practice a lot. My current voice is a result of a lot of work.

Kanami, that guitar solo in “Real Existence” is impressive. What goes through your mind when you know your solo is coming up?

Kanami: While I’m playing, I’m not thinking about anything, actually. My mind is sort of blank. Maybe that’s dangerous? (laughs)

Miku: Of course the challenge is singing to the rhythm and singing with emotion, but it’s really about feeling good. I’m not that good with the guitar, so I try so hard not to focus on the guitar all the time. (laughs)

The world is learning about you all through YouTube. What YouTube videos have you all watched lately?

Miku: On YouTube, besides music, I watch different kinds of videos like comedy and TV shows. I watch a lot of horse racing.

Akane: Lesson videos for the drums and performance videos like drum covers. 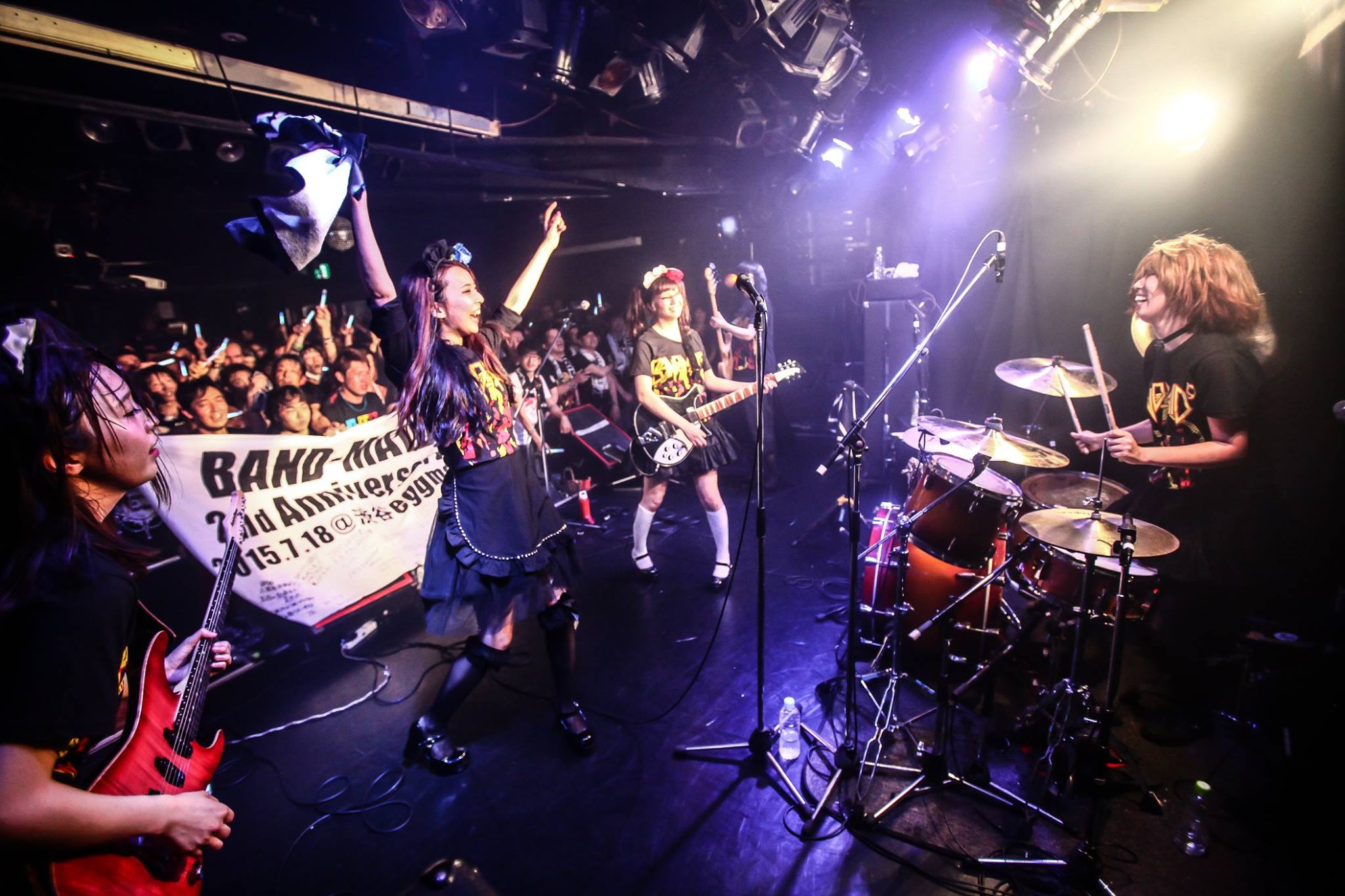 On YouTube, I see the same comment all the time: “Wow! They can really play their instruments!” Why do you think people are so surprised by this? What do you say when you hear these comments?

Miku: I think it’s because people have a strong image of “idols” about Japan. I’m genuinely happy about the comments. I want to show “We’re not just the look!”!!

Saiki: We’re looked down because of our look, I guess. But we get to change people’s minds.

Misa: It’s natural to think “Can young-looking, cute girls really play such a heavy sound or play the double bass drums?” I think. If I was just a bystander, my response would probably be the same.

Akane: It’s absolutely a prejudice, so we prove our skill through live shows.

What’s your goal for BAND-MAID’s future?

Miku: Thankfully, we’ve been receiving more support and messages from many people overseas, so our goal is global expansion!

Saiki: I want to go global and enjoy music as much as I can!

Kanami: We want to become well known all over the world!

Misa: I want to have live shows overseas. And I want to drink good alcohol and eat pizza, meat, etc.

Akane: They’ve all said it, so me too — global expansion! Also, I want to continue to break the walls between genres, and continue to do things no one else but BAND-MAID can do!