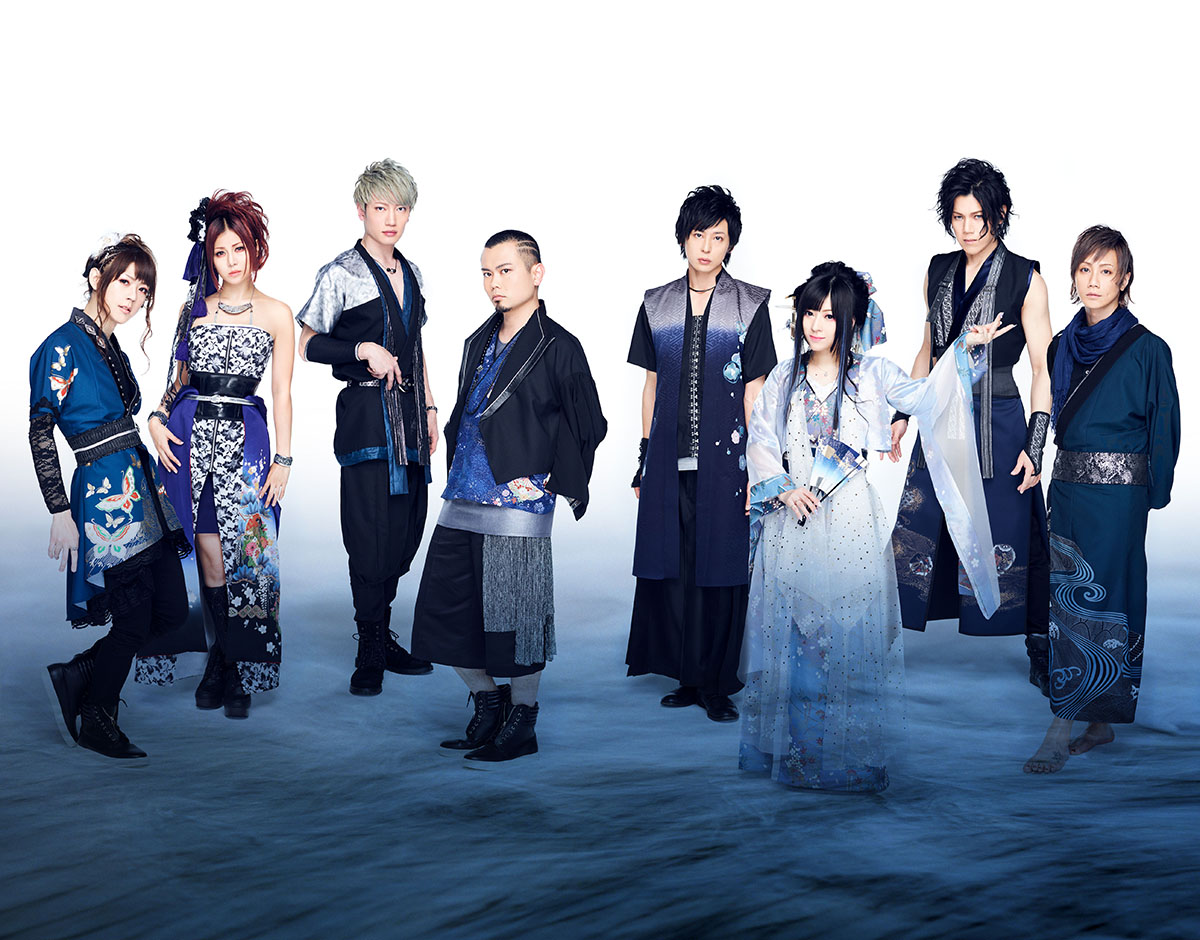 Wagakki Band released their fifth studio album Otonoe in April and we had the chance to talk to Yuko Suzuhana (vocals), Machiya (guitar), and Ibukuro Kiyoshi (koto) about their stunning new release, the creative process, and inspiring a new generation in the art of wagakki.

Aside from rock, some of your recent work includes musical elements like jazz, piano, and orchestra. Why did you decide to add these new creative elements?

Suzuhana: Each of the eight members of our group have different musical roots, and I’ve felt uncomfortable being perceived as a rock band — our music naturally evolves as we continue to share our musical tastes and influences with each other, and we don’t feel like we’re limited to just one genre. After five years together, we understand each other better and we’ve been able to create our own unique “Wagakki Band genre”. That’s the voice we’re using to express ourselves. As for the piano, it felt comfortable to make that next step since I majored in classical piano in college. The sound has always been in my head, but we waited for the best timing to include it, once we established what Wagakki Band is.

Yuko, many of your lyrics on this album focus on snow imagery, like in “Yuki kageboshi”. What attracts you to this theme?

Suzuhana: I think that there are many ways to express the imagery of seasons, and snow is just one of them. For this song, we wanted to find a way to tell a story in a way that was unique to Wagakki Band and also bring a sense of Japanese culture. This is a stylistic choice that affects many of our songs, because many of the techniques of playing wagakki will remind you of natural sounds like wind and water. 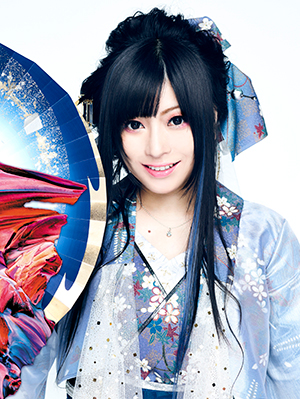 The music of “Shizumanai taiyou sakushi” is really complex. What was it like creating this song?

Machiya: In Kurona’s case, he conveyed his imagery through words and then I interpreted them into a musical arrangement. But if I had arranged it “as-is”, it would have become a song over 7 minutes long! So I had to organize my thoughts and find a few creative solutions. (laughs) This is a song that could have been made in a variety of ways, like adding an organic human feeling with shakuhachi and guitar, or a mechanical feeling that has many loop phrases of koto and shamisen. But once I felt like I found the best balance for this song, everything came out easily with a lot of confidence and strength.

“Sabaku no Komori Uta” is one of the most emotional songs in the album. What’s the story behind this track?

Suzuhana: It might sound like I’m showing off if I say the song came to me suddenly, but I stayed in a dark room with a piano and wrote it in one sitting. It felt like I was possessed by something I can’t explain, like I was tracing back a memory from a previous life. In my mind, I could see it so clearly — there was a story of a traveler with a biwa-like instrument in a desert in a foreign country, communicating a sad Japanese story as a lullaby. Thanks to the arrangement by Machiya, it became an emotional song that expresses my vision completely with vivid detail. 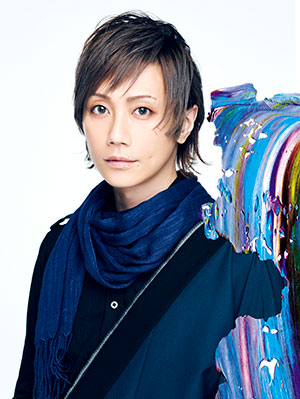 Machiya, you wrote the lyrics for “Guren” which was composed by Wasabi. How did you collaborate with him to write the lyrics?

Machiya: The original temporary lyrics written by Wasabi weren’t as strong as we thought they could be, so I was asked to give it a try. Since I did the first demo arrangement, I had a strong image in my mind that was inspired by the melody and codes. As I finalized the arrangement, I wrote the new lyrics while interpreting the thoughts through the melody.

How did you choose the music video concept for “Sasameyuki”?

Machiya: I think that there are many ways to visualize Japanese style, and a perspective that mixes different cultures and genres, digital art, and animation is, in fact, very Japanese. Having this in mind, the production studio, NAKED, inc., suggested the theme of a digital karesansui (Japanese dry landscape garden). We agreed to their presentation because this was a filming technique we’d never tried, and together we discussed how to express the Japanese elements. 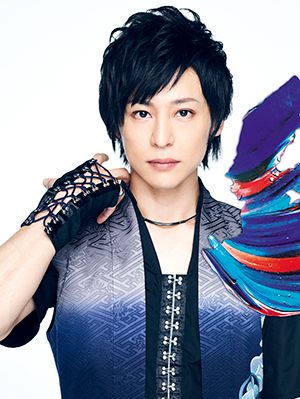 What’s the biggest challenge of fusing wagakki-style instruments into your music?

Kiyoshi: Normally, a band’s style of music is expressed by mainly following the chords. Japanese instruments specialize in expressing the Japanese pentatonic scale with different sounds using different techniques, rather than playing chords. So, to play components of chords, we use techniques that are not used normally and incorporate multiple instruments. For simple things, each of us work with microphones to capture acoustic wagakki sounds clearly, so with the help of our sound engineers, we can deliver true wagakki sounds that don’t get overpowered by the electronic instruments.

Suzuhana: I receive many messages through SNS and fan letters, saying that someone actually started playing wagakki, that shigin (singing Japanese poetry) is cool despite its image that it’s just for old people, that he or she heard about kenshibu (Japanese interpretive dance) for the first time… My teachers at my former school tell me that many people come to the school wanting to learn these things after seeing Wagakki Band. Sometimes I see bulletin boards with flyers wanting members for a copy band or a wagakki player for a new band. Since we started the band, I see and hear these kind of things all the time, and I’m grateful. We’d like to keep playing as long as we can while keeping our core values so that we can continue to be an inspiration for others.

When you see the enthusiastic responses to your music by non-Japanese fans, how does that change the way you view your own music and wagakki itself?

Kiyoshi: It’s made me more confident. When I was a teenager and first heard a koto performance, I was shocked and moved to know that it was such a wonderful instrument. I feel very fortunate to be the one who gets to bring that same feeling to others, and playing with wonderful musicians gives me even more joy on top of that.

What have you learned about music from working with the other members of Wagakki Band?

Suzuhana: Since the musical roots of eight members are all different, I get really stimulated by the differences in the way each of us approach the same song and in the way each instrument expresses itself. Although there are many ways to hear a band play music, there aren’t many chances to hear wagakki music in daily life, even in Japan. The band members truly understand the characteristics of wagakki, and they all give suggestions on how to make the wagakki parts more effective during arrangement and composing. That constant collaboration brings us into so many creative conversations, and that creativity and excitement always ends up in our music.