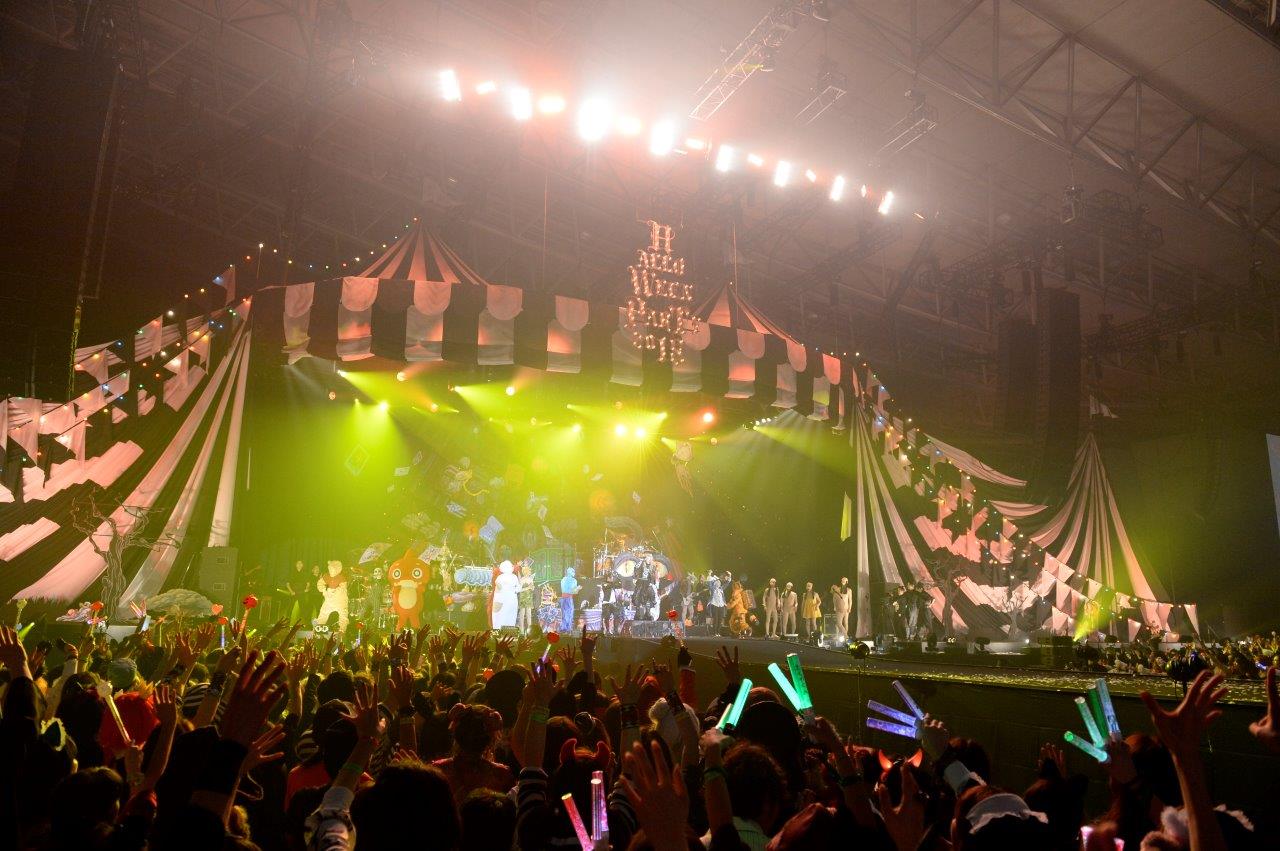 HALLOWEEN PARTY 2018 was the first year that the entire event was focused around a central theme. The stage was decorated in iconic Alice in Wonderland tea party imagery and began with the shocking sight of a woman falling from the scaffolding of Makuhari Messe before the place was plunged into darkness, immediately evoking the visual of Alice falling down the rabbit hole. After the lights came back up, a lone figure could clearly be seen laying at the end of the catwalk. 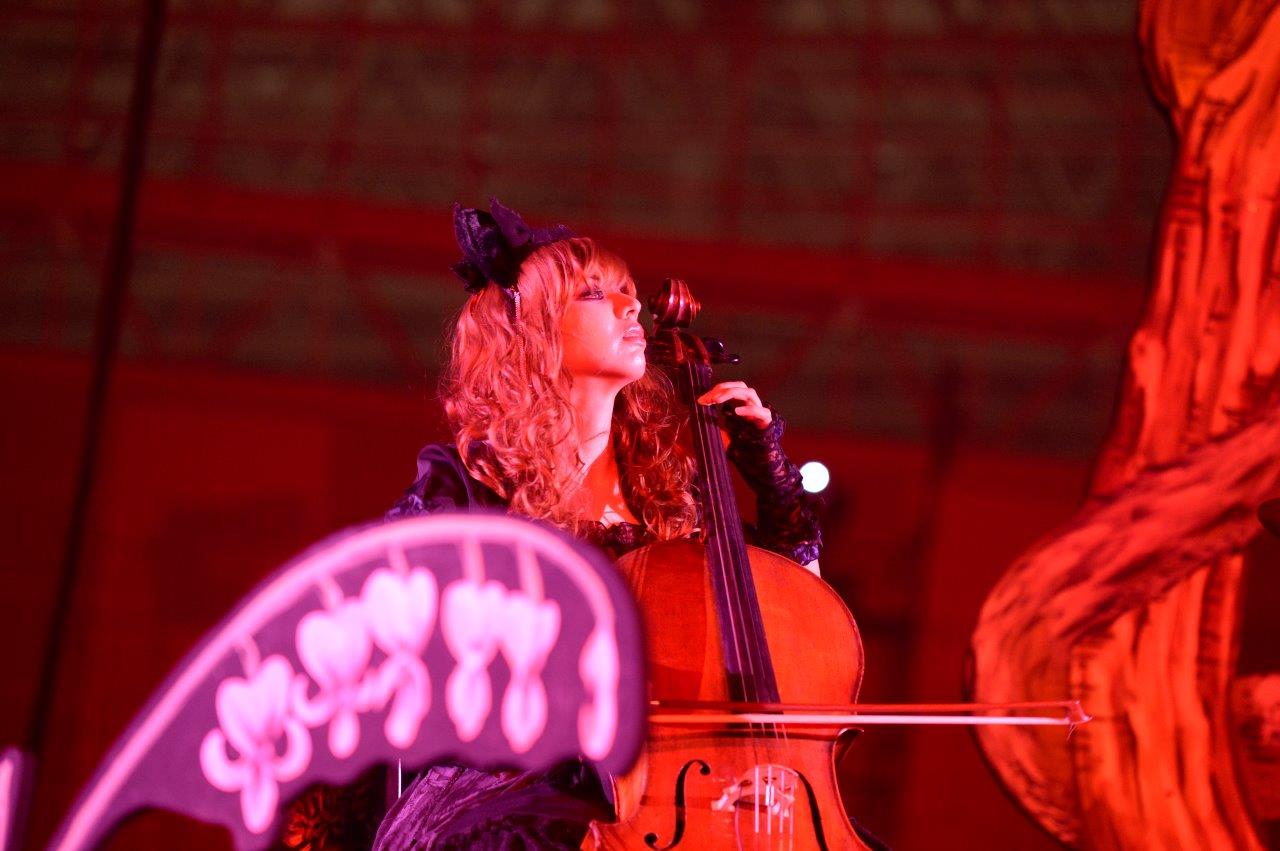 Two dancers dressed in cute bunny ear-tipped hats and striped stockings helped her into a chair, where the audience could see it was in fact Kanon Wakeshima She was given her cello and performed a haunting tune, “still doll” before the ticking of a clock echoed through the hall. The dancers seemed to say, “We’re late, we’re late! We have to go!” before running back up the catwalk with Kanon chasing after them. After they all vanished behind the curtain, the place was suddenly illuminated with red light as a blood-curdling scream rung out through the venue.

The Alice in Wonderland theme took a break then, as DAIGO could be seen bursting into the hall, running at top speed in a pair of sunglasses and bulletproof military-style vest — not on the stage, but through the standing area. His costume became clear as the iconic Mission Impossible music blasted overhead. The mission for secret agent ‘DAIGO CRUISE’, as he would soon introduce himself, was then displayed on the large screens on either side of the stage: “GET THE VENUE HEATED UP FOR HYDE”. 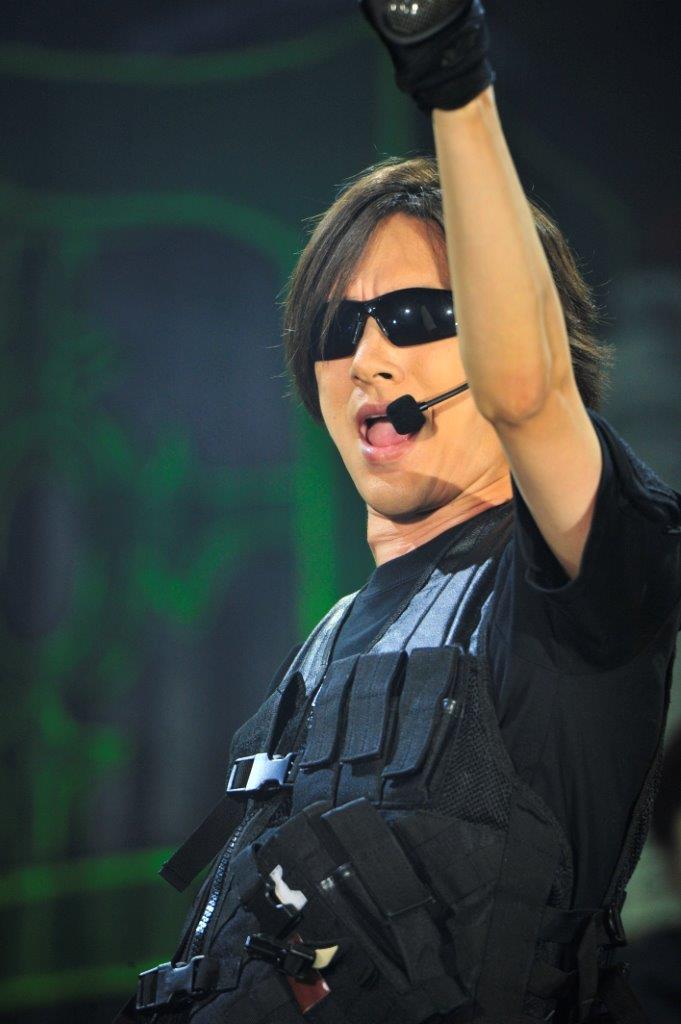 DAIGO, finally taking the stage, explained his costume choice to the audience. “In the latest Mission Impossible movie, Fallout, I did some dubbing for the Japanese version. I wasn’t Tom Cruise’s character, but I like him a lot, so I decided to be him for Halloween!”

DAIGO seemed to tire of his outfit after. “I can’t see anything in these sunglasses, you guys. Can I take them off?” Of course the audience said he could, laughing. He then went on to express his gratitude to HYDE for organizing the event. “All of my accomplishments are because of HYDE. I met him about 15 years ago, when DAIGO☆STARDUST was born. I want to sing this final song to remember the time when we first met.” He then donned a sequined silver cowboy hat before launching into “Eien no SPACE COWBOY”.

“Halloween Collection”, the costume contest that fans can enter for the chance to walk the catwalk in front of thousands of their peers, made a return this year. It was a welcome reappearance, and featured YUKI (Rayflower, DUSTAR-3) and Hitsugi (GREMLINS, NIGHTMARE) in matching Tweedle-Dee and Tweedle-Dumb outfits, though they comically could not seem to remember who was meant to be who.

It was during one of these brief sessions that Tatsuro (MUCC) and ASH DA HERO did a brief set of songs together. Tatsuro was dressed as a terrifyingly convincing Pennywise from the recent remake of It, and ASH DA HERO was an adorable white rabbit. 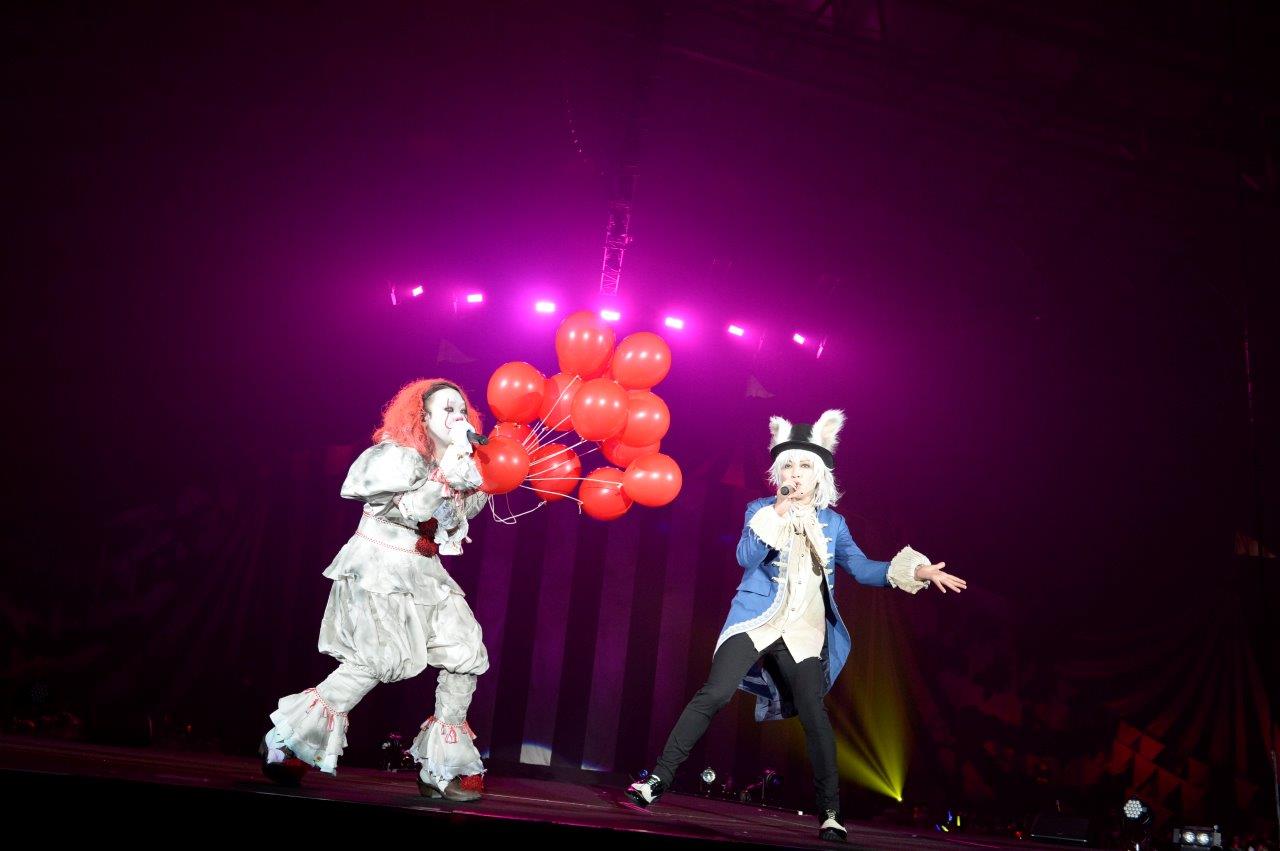 KISHIDAN’s performance at HALLOWEEN PARTY has always been a surreal experience, and this year was absolutely no exception. They began their set with a surprise cover of MAN WITH A MISSION’S “Fly Again”, though exactly why would soon become clear, and had everything to do with the fact that MWAM members masquerade around in the guise of canines.

The costumes KISHIDAN had chosen are difficult to describe — imagine a white, barely-opaque full-body sock, complete with tight hood over the head. Imagine two long locks of black hair somehow attached to each side of the head. Imagine some kind of denture shoved under a questionably affixed prosthetic where the upper lip should be, creating a kind of crude snout. It was a truly bizarre and grotesque sight. The band didn’t give the audience any kind of reprieve from their confusion, waiting until about the third song to finally let everyone know what their getups were supposed to represent. 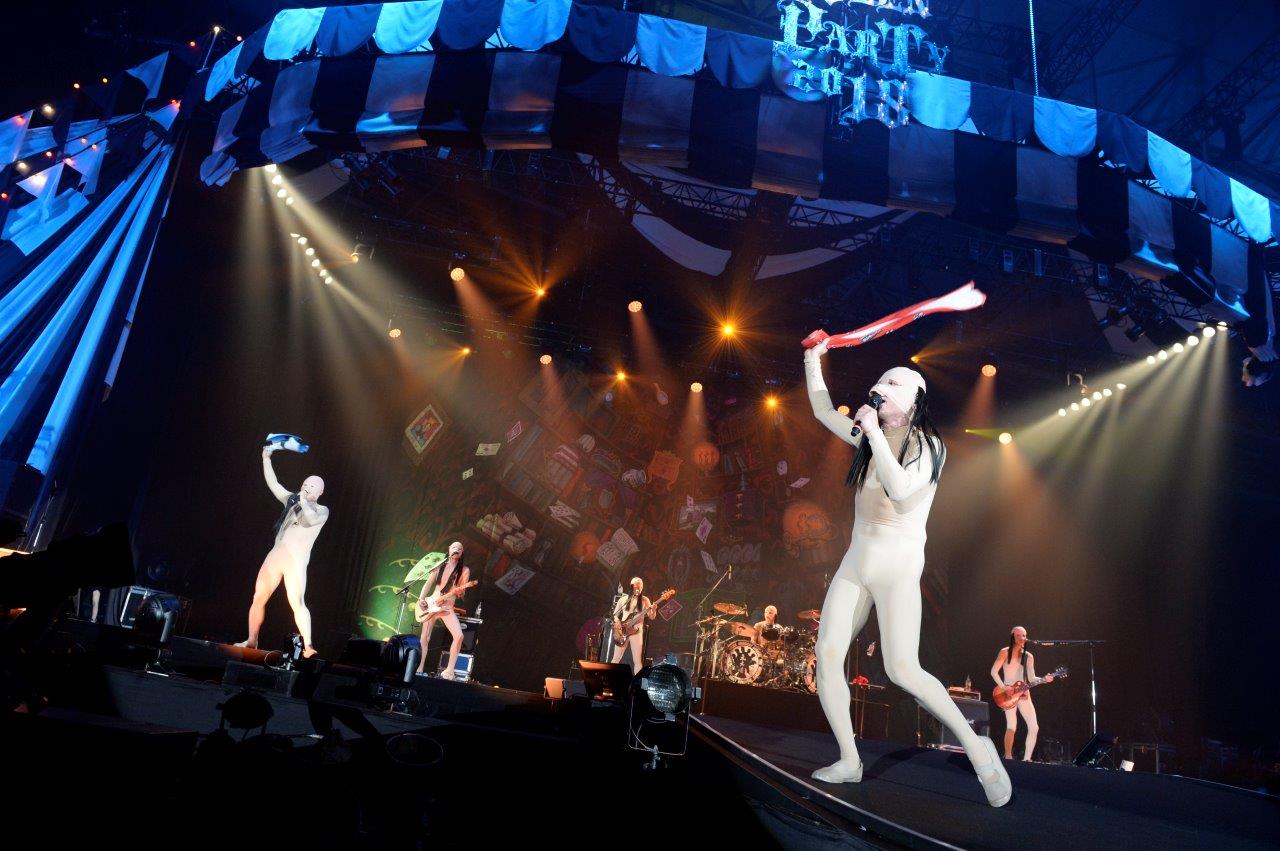 “We’re Snoopy!” Hikaru declared, seemingly confused that no one had gotten it yet. The audience roared with shocked hilarity as he continued. “The puppy you all love! You didn’t realize? No way. Our next song is ‘One Night Carnival!” he quipped to more laughter, referring to the sound dogs make in Japanese culture — ‘wan’, which sounds exactly like ‘one’.

The next ten minutes were utter chaos — six grown men running around in circles, barking, donning yellow skirts to do some vulgar rendition of the Macarena, introducing what was supposed to be the version of “One Night Carnival” re-imagined 15 years into the future. (That version sounded an awful like like DA PUMP’S “USA”, by the way.)

Then, just as abruptly as KISHIDAN’s set began, it was over, leaving everyone in attendance with euphoric whiplash. The band is absolutely hysterical live. 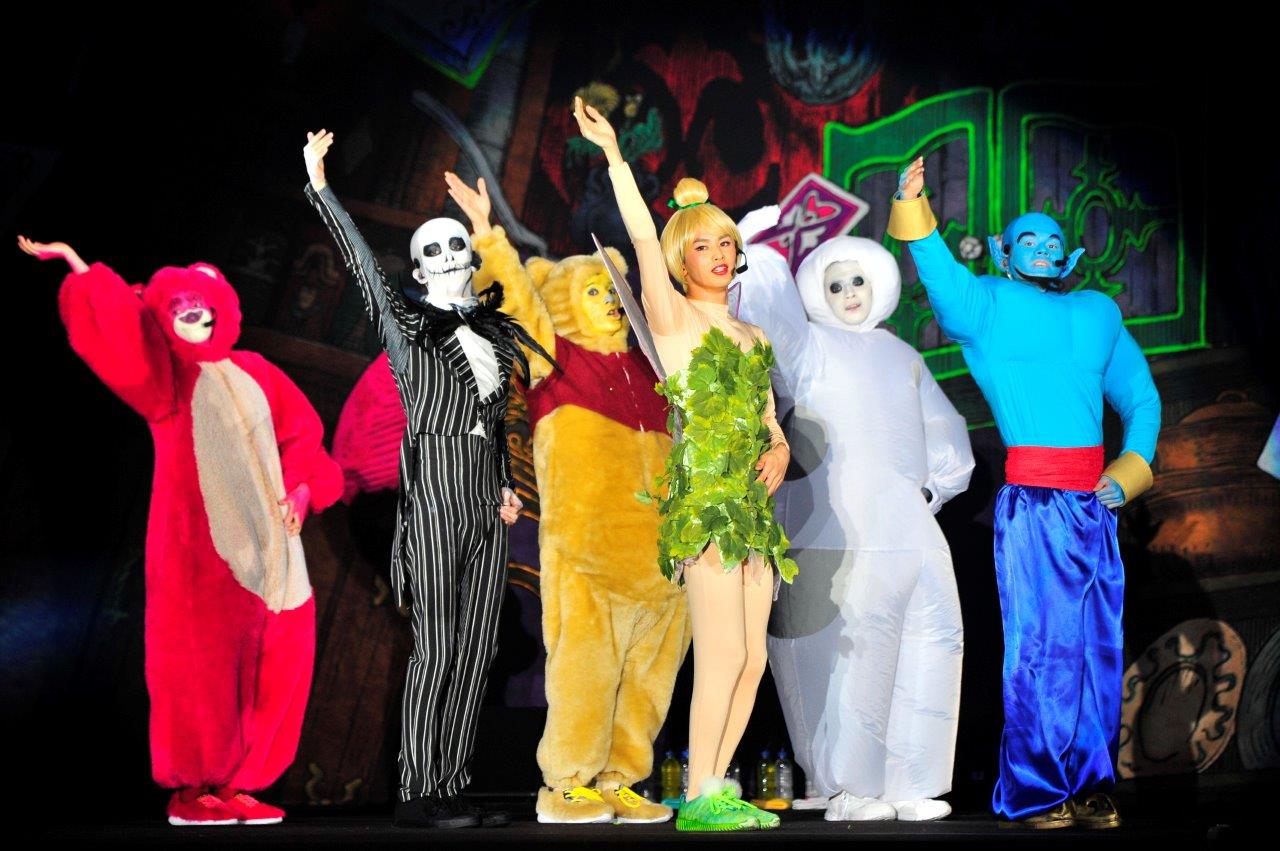 Bullet Train was the pop act for the night. Makuhari was dotted with different colored lightsticks carried by their loyal fans. The members had all dressed as different popular Disney characters, which made for a wild sight, as the group frequently breakdances in a highly theatrical fashion. The dances seem to always tell a story and featured mock-fighting — seeing Tinker Bell “punching” Lotsa the Bear before he began to pop and lock was not something I thought I would witness in this lifetime. If you’re into EDM pop and are on the lookout for a new banger to add to your playlist, check out “Beautiful Chaser”.

Then it was time for the main event. All of the Alice in Wonderland stage props began moving in a way reminiscent of clockwork toys. A hat that glowed green under the lights lowered slowly from the ceiling, vanishing behind a large chair at the center of the tea party table. HYDE turned around in the chair, revealing himself to have been there the whole time. 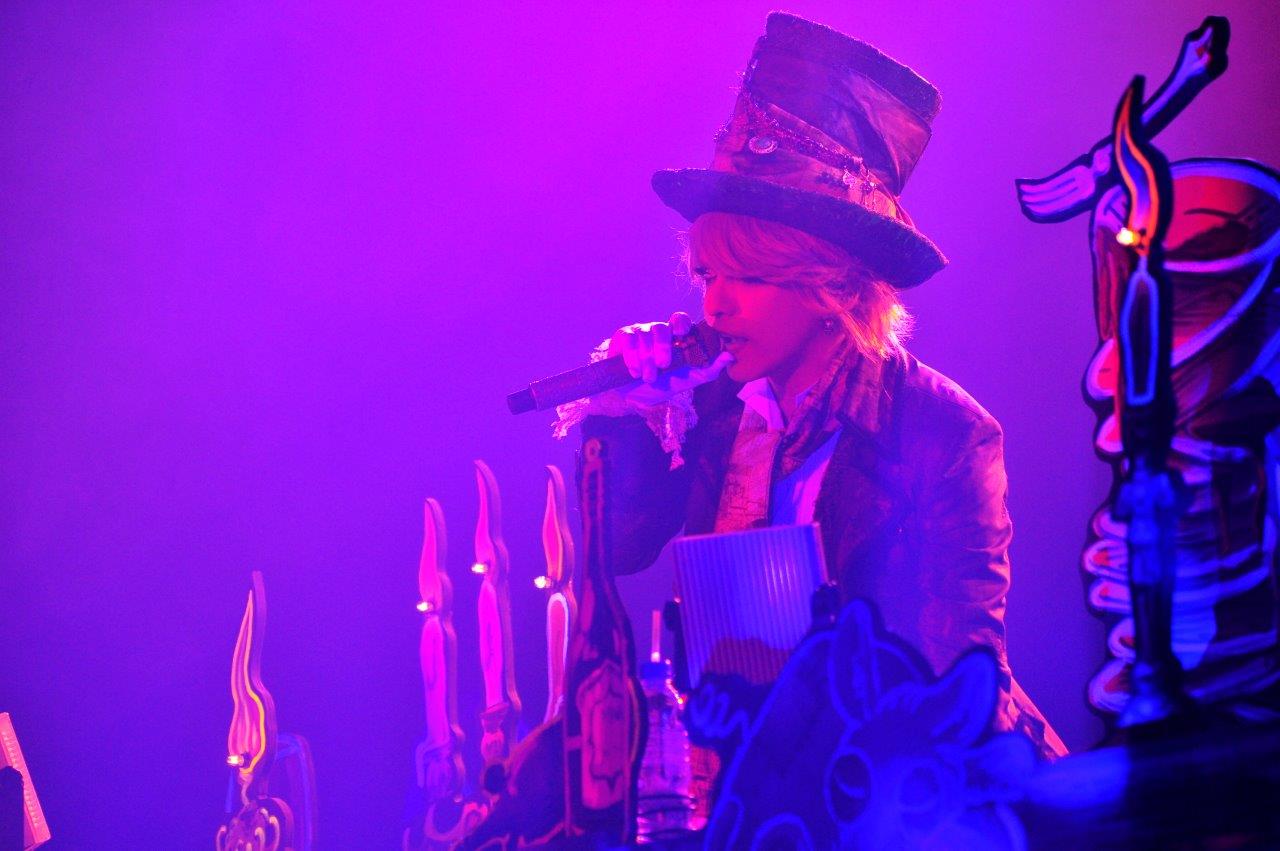 The tea table became a sort of chariot for HYDE during “UNDERWORLD”, pushed around the stage as HYDE alternatively sat and stood upon it, really working the Mad Hatter angle with his wild antics. He wanted more, however, and quickly made his way up the catwalk to step onto something that could wheel him around the entire venue. The small moving platform had a menacing cut-out Cheshire cat staring down at HYDE from a twisted tree as he belted out “Kangoku ROCK”.

The platform came to a stop at a second stage near the back of Makuhari Messe, where Sakura (gibkiy gibkiy gibkiy, Rayflower, ZIGZO) and Kanon were playing some freeform jazz. HYDE played coy, speaking to Sakura with aching politeness. “Oh! Sakura-san! It’s you! Let’s do a song together. An old one.” As the audience shouted their enthusiasm, “ENTICHERS” started up – a classic song from very early on in L’Arc~en~Ciel’s history. The jazzy, acoustic arrangement featuring Kanon’s smooth cello breathed fresh life into the song and made room for HYDE’s far gruffer vocals of today.

ROLLY stole the spotlight, appearing on the main stage to perform a seriously impressive old school guitar solo. The man is like a sparkly clown from a fever dream. DAIGO also appeared, having traded his Tom Cruise costume for the spectacular DAIGO☆STARDUST costume from his debut 15 years ago. The two launched into a lively rendition of “SEVENTH HEAVEN”, another well-loved L’Arc~en~Ciel song. 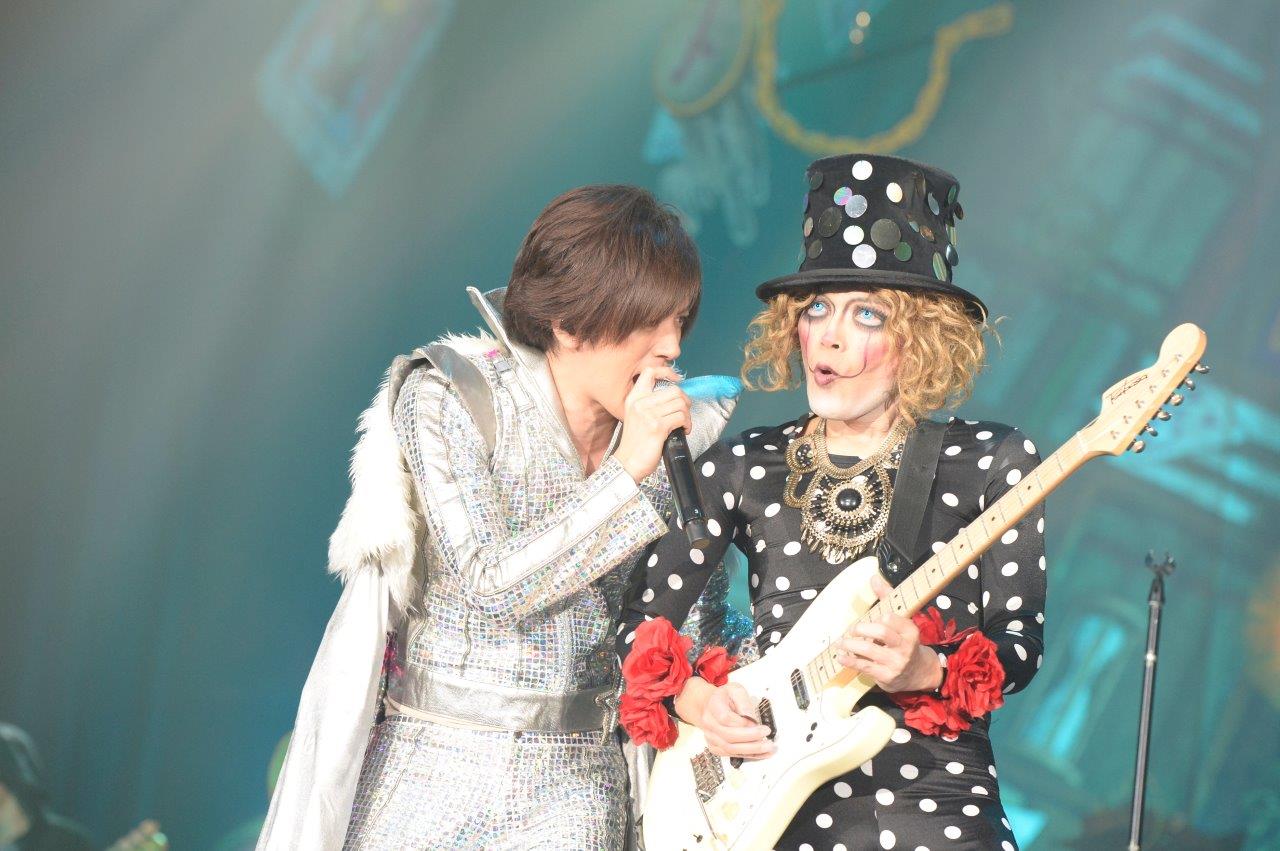 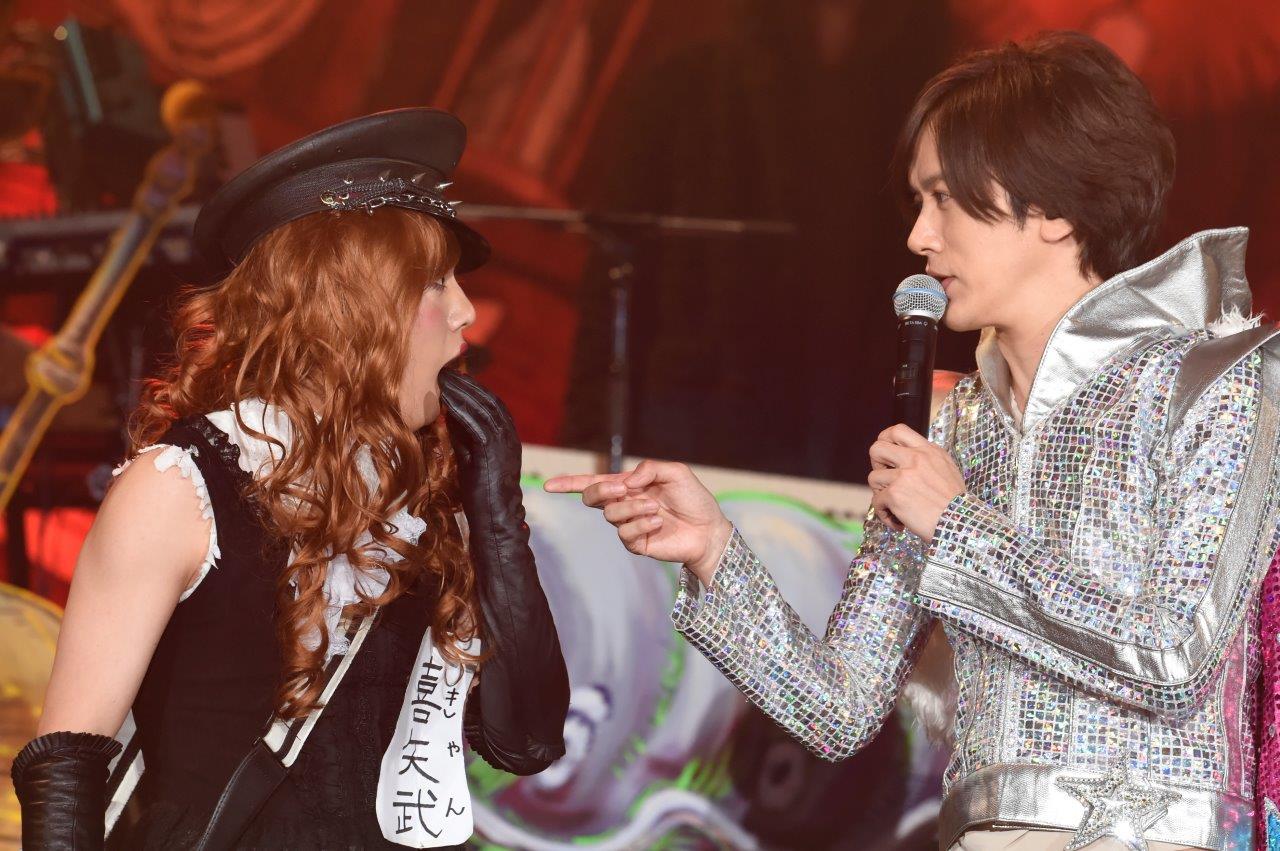 “HYDE said that ROLLY and I should be all sparkly together,” DAIGO went on to explain, gesturing between the two men’s flamboyant jumpsuits. Then he seemed to realize that HYDE had been absent from the stage for the entire song, glancing around and asking where he was before the whole place went dark once more.

When the lights went up again, HYDE had reappeared in what appeared to be a gothic rendition of an Alice costume, holding a red rose as the clutched the mic stand at the end of the catwalk. His performance of “VAMPIRE’S LOVE” was stellar, as we have come to expect from this excellent ballad. 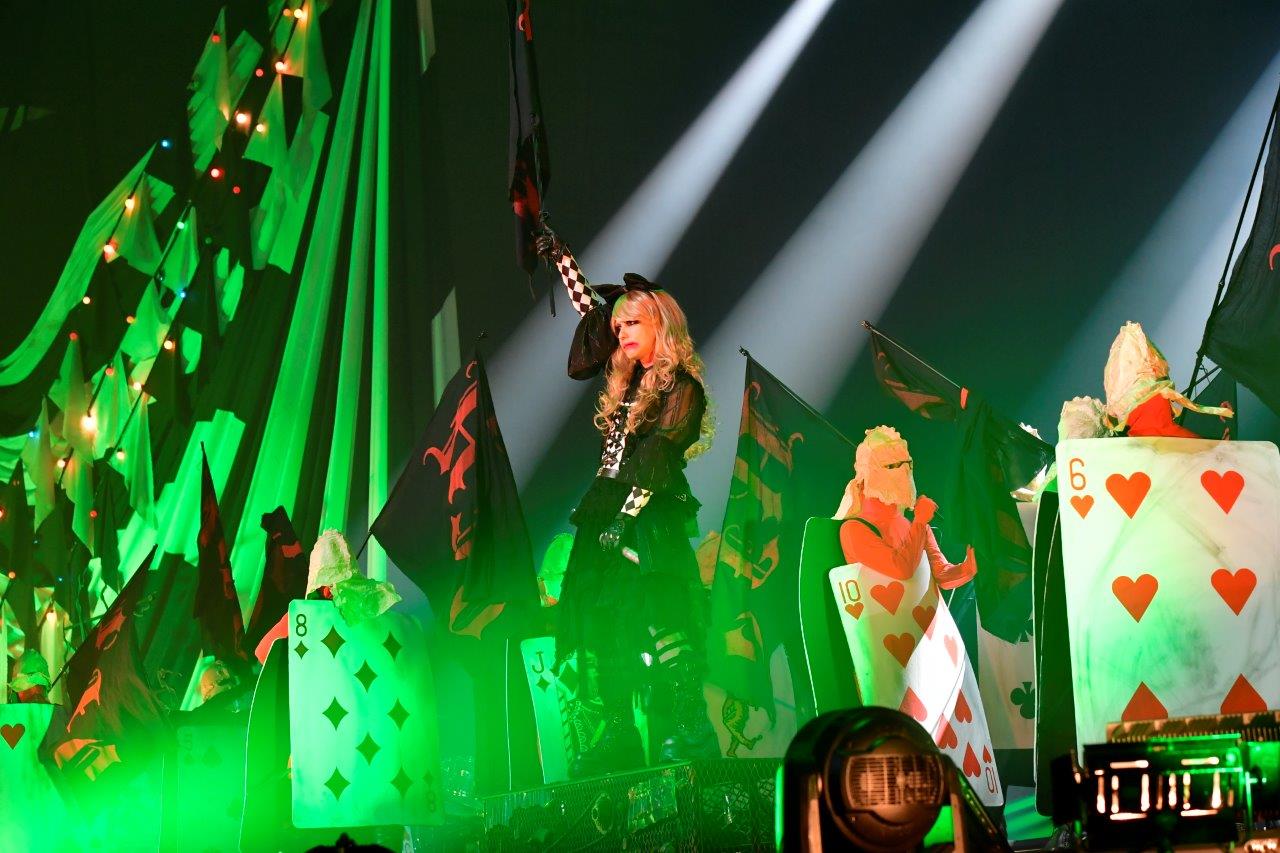 It was time for the guest of the night to finally make an entrance. Out came TERU (GLAY), dressed as Squall Leonhart from Final Fantasy VIII. HYDE hugged him like a brother, urging him to begin an enthusiastic rendition of the popular GLAY song ” Yuwaku”. TERU must have been distracted by HYDE’s skirts, because he goofed up his own lyrics in a particularly charming moment.

DAIGO saw fit then to help HYDE adjust the bangs of his blonde wig, which inspired thrilled screams from the ladies in the audience. HYDE’s entire demeanor was very Alice-esque, exemplified by the moment when he cutely asked TERU if the wanted to drink some water with him, both sipping on straws with deliberately adorable expressions. DAIGO stared comically, declaring, “Wow, just watching you two drinking water moves me.”

The two friends then sang “GLAMOROUS SKY”. It really felt like peeking in on a private session of karaoke between two friends who could barely contain their own laughter at how silly the other was being. TERU said to HYDE after they finished the song, “A pretty face like that could make me fall in love.” To which HYDE flirtatiously answered, “Oh TERU~” before dabbing the GLAY vocalist’s sweaty brow with a towel. DAIGO chimed in again, “Look at this awesome couple!” 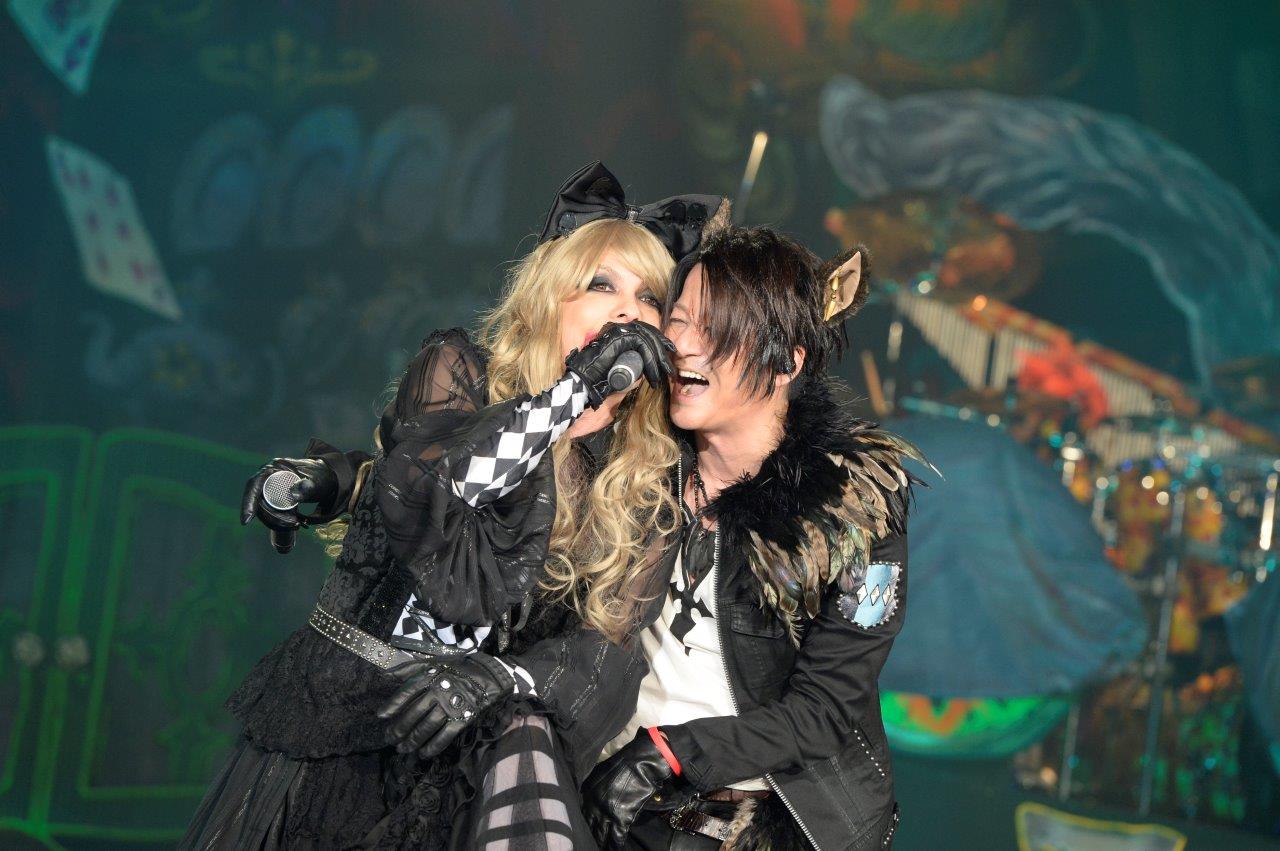 The playful mood continued through the final rendition of “HALLOWEEN PARTY” by the entirety of the Halloween Junky Orchestra as they tossed candy into the crowd. The final act of the night was another tradition — HYDE climbed into a kid’s inflatable pool to take part in the ice bucket challenge to continue to raise awareness for ALS.